Ranger is Ford’s attempt in a crowded compact pickup truck, whose production spans for several decades and four generations. Throughout these years, it held a considerable market share and rack up respectable sales figures of over 7 million units sold. This story, just like many other things in the automotive industry, starts with a crisis. During the 70s, frequent conflicts in the Middle East hampered supply of crude oil and caused fuel shortages. This made buyers turn their focus from big, gas-thirsty vehicles to smaller and more efficient variants. This situation caught the Big Three off-guard, as they had only several models aligned with market demands of that time. When it comes to pickup trucks, only Japanese manufacturers were prepared for this environment. Vehicles like Datsun 521 and the original Toyota Hilux started gaining popularity. As a countermeasure, Ford resorted to stop-gap solutions, just like GM and Chrysler, who partnered up with Isuzu and Mitsubishi.

The first compact pickup truck with blue oval emblem, called Courier, was a rebranded Mazda B-Series truck. Being designed and manufactured by Mazda itself, this was a textbook example of badge engineering. These two models shared chassis, engines, gearboxes and most of the body work. Only noticeable differences were the front grille, which resembled larger F-series and large single headlights that did away with the small double ones on the Japanese sibling. 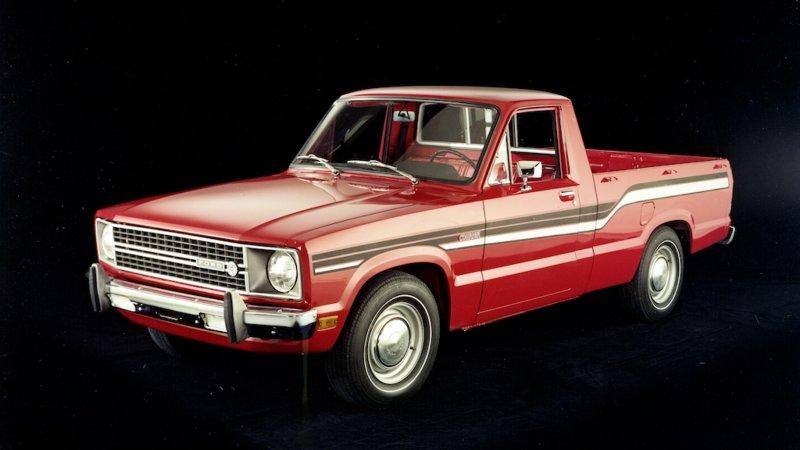 Alongside with the Courier, which was a temporary solution from the start, Ford started developing their own compact pickup truck. Starting in 1976 under the codename Yuma, this project was crucial for Ford and their future role in the light-truck market. With the upcoming years bringing strict fuel economy and emission standards, all manufacturers faced challenges of downsizing. This called for lighter vehicles and smaller engines. To meet these goals, the focus of project Yuma was on flexibility, quality and overall efficiency. After several years of development, and a considerable amount of money, the first American compact pickup truck was ready for production.

The newly designed truck, now named Ranger instead of Yuma, featured many improvements and innovations, making it anything but F-series little brother. Thanks to extensive wind tunnel testing, this truck had a drag coefficient lower than most family cars of that time. In addition, the use of lightweight materials such as aluminum and magnesium helped keep the weight down. Another notable innovation was the twin-beam front suspension, which offered improved road comfort and driving dynamics than a live axle while keeping the sturdiness for off-road use.

Unveiled in the spring of 1983, the first ever Ranger hit the showroom floors several months ahead of schedule as to beat the upcoming Chevrolet S-10 to the punch. While the technology underneath it was ahead of its time, the outer design was quite conservative. Ranger featured body lines that mimicked those of larger F-series trucks and a flagship LTD, later known as Crown Victoria. With flat surfaces and straight edges mated to a characteristic front grille and headlight design, it looked as a scaled-down F-150. 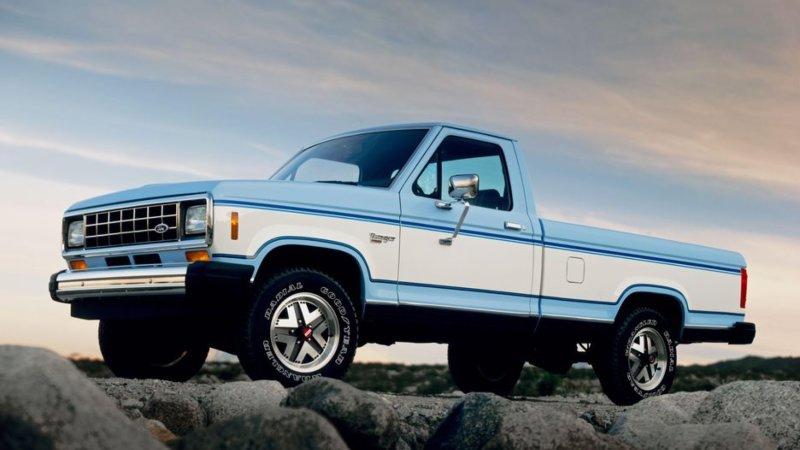 The design and general layout of the interior focused on potential buyers who wanted more than just a work truck. Plenty of space with enough legroom and headroom, comfortable seats and various other details were some requirements it had to meet. Ranger was available only as a two-door version, with an extended cab coming as an option. Cargo bed, although smaller than those of full-size competitors, could still carry a four-foot wide sheet of material, which is an unofficial industry standard for measuring trunk space.

During its lengthy production run, Ranger offered several engine choices in many variants. There was a four-cylinder Pinto engine, which came with carburetors or fuel-injection. More powerful models used a famous Cologne V6 engine, available in several sizes and power outputs. During the last two years, all-new Vulcan V6 became a standard. There was also a diesel option, first in the form of the Mazda-sourced engine and the latter as a more powerful unit from Mitsubishi. Transmission options included four-speed manuals and three-speed auto, with the five-speed manual and four-speed variants coming in later years.

Because of strong competition and conservative appearance, initial sales of the new Ranger were slow. As time went by, with additional trim levels and hidden virtues becoming a well known fact, and sales picked up. Towards the end of the decade, the Ranger became the best selling compact pickup truck in the US.

Following the success of the previous generation, the new Ranger used the same basic recipe. With most of the chassis and mechanical underpinnings carried over from the old truck, the focus was on the outer design. Box-like shapes were a thing of the past, as the new car featured sleek and rounded body lines, with individual design elements that distinguish it from larger Ford models. Special addition to the lineup was Ranger Splash, which featured retro-styled step-side bed, chromed wheels and other visual improvements. Serving as an official vehicle in the hit series ‘Baywatch’, it soon became a popular choice among younger buyers. 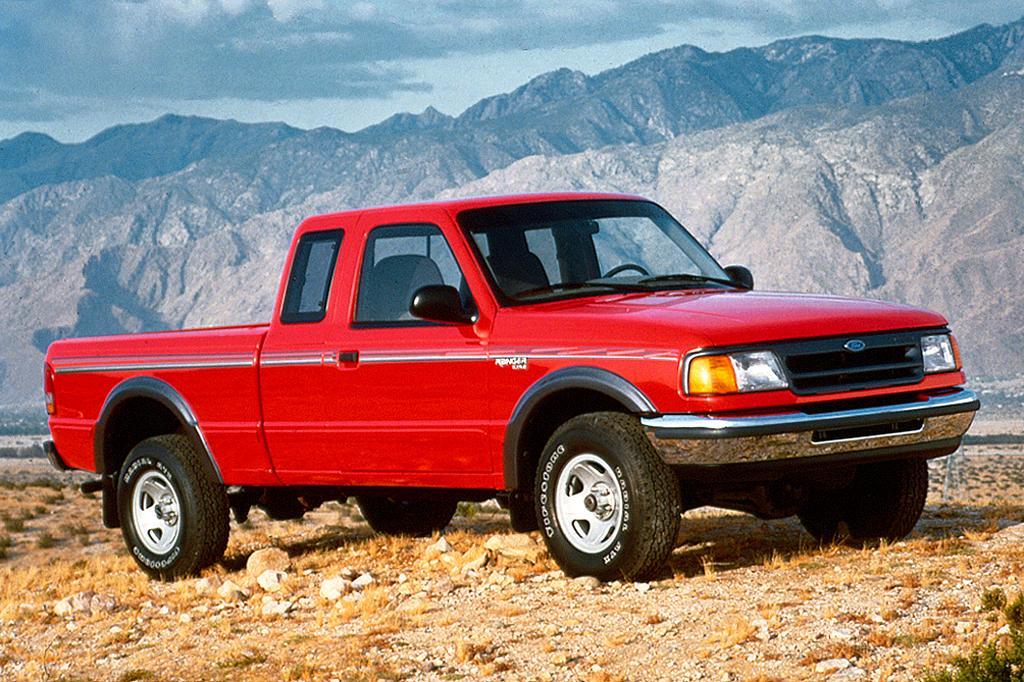 There was more space inside the cab, mostly because of a wider cab, which again came in a pair of two-door variants. Other than redesigned seats and some minor upgrades, the interior saw limited modifications. There was a focus on safety, with updates including anti-lock brakes, side impact guard beams and airbags for both driver and passenger.

There were no significant changes under the skin, as the engine range comprised familiar units. Besides a four-cylinder Pinto and Cologne V6, there was also a newly developed Vulcan V6 engine that offered improved performance and fuel economy. Being more of a sport truck than a work-horse, this generation had no diesel option. Besides the five-speed manual and four-speed automatic transmission options, this generation was the first to offer a five-speed automatic. Just like in the previous generation, the rear-wheel drive configuration was standard, with an all-wheel drive as an option.

In its third iteration, the Ranger received only a mild visual update, with outer design being similar to the old version. Notable modifications were lower the hood line, redesigned fenders, and grille similar to the F-150 of that time. The biggest change was the Super Cab variant, which was the first truck in this segment to use rear-hinged doors. Just like with body design, the interior was very similar to that of the previous generation. 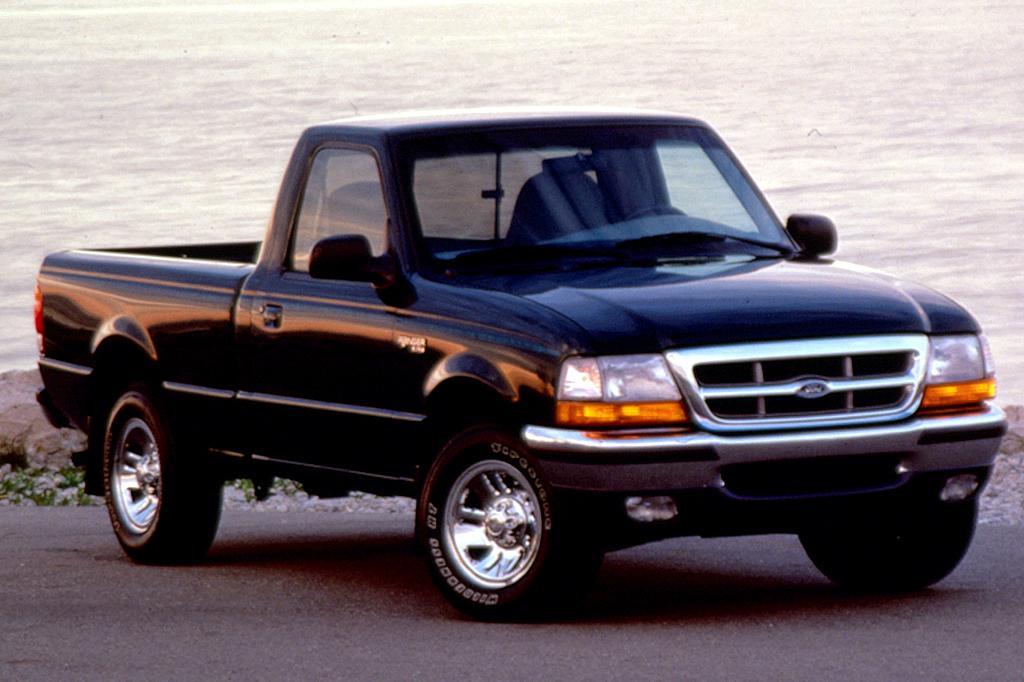 Unlike conservative exterior and interior updates, the chassis and drivetrain in general received major improvements. At the front, a double wishbone suspension replaced the long-running Twin I-Beam setup. Coupled with rack-and-pinion steering instead of recirculating-ball assembly, this improved both handling and ride comfort. There was a significant frame redesign, as box sections replaced C-channel construction for increased structural rigidity.

During the beginning several years, engine options were like those of the previous generation, with a four-cylinder Pinto and several V6 units. Later during the production, a Mazda sourced four-cylinder engine replaced the aging Pinto. Again, diesel engines didn’t find their way under the hood. Similar to the previous generation, transmission choices included both five-speed manual and automatic, with rear-wheel drive or all-wheel drive variants available.

Despite the huge success achieved throughout all three generations, the sale figures for the Ranger declined during the 2000s. This was in part because of the increasing competition from both domestic and import rivals. Another contributing factor was the arrival of SUVs and crossovers, which targeted similar buyers. While Ford was planning to unveil the fourth generation, the recession of 2008 put a stop to these efforts. Instead, they have dropped the Ranger and focused on F-series trucks only.

Following an 8 year pause, during which it was available in the rest of the world, the Ranger has returned to North America at the end of 2018. The current truck, now positioned in the mid-size pickup truck segment, uses the Ford T6 truck platform as a base. When compared, the American version has modified chassis to meet crash standards and increase payload capacity. 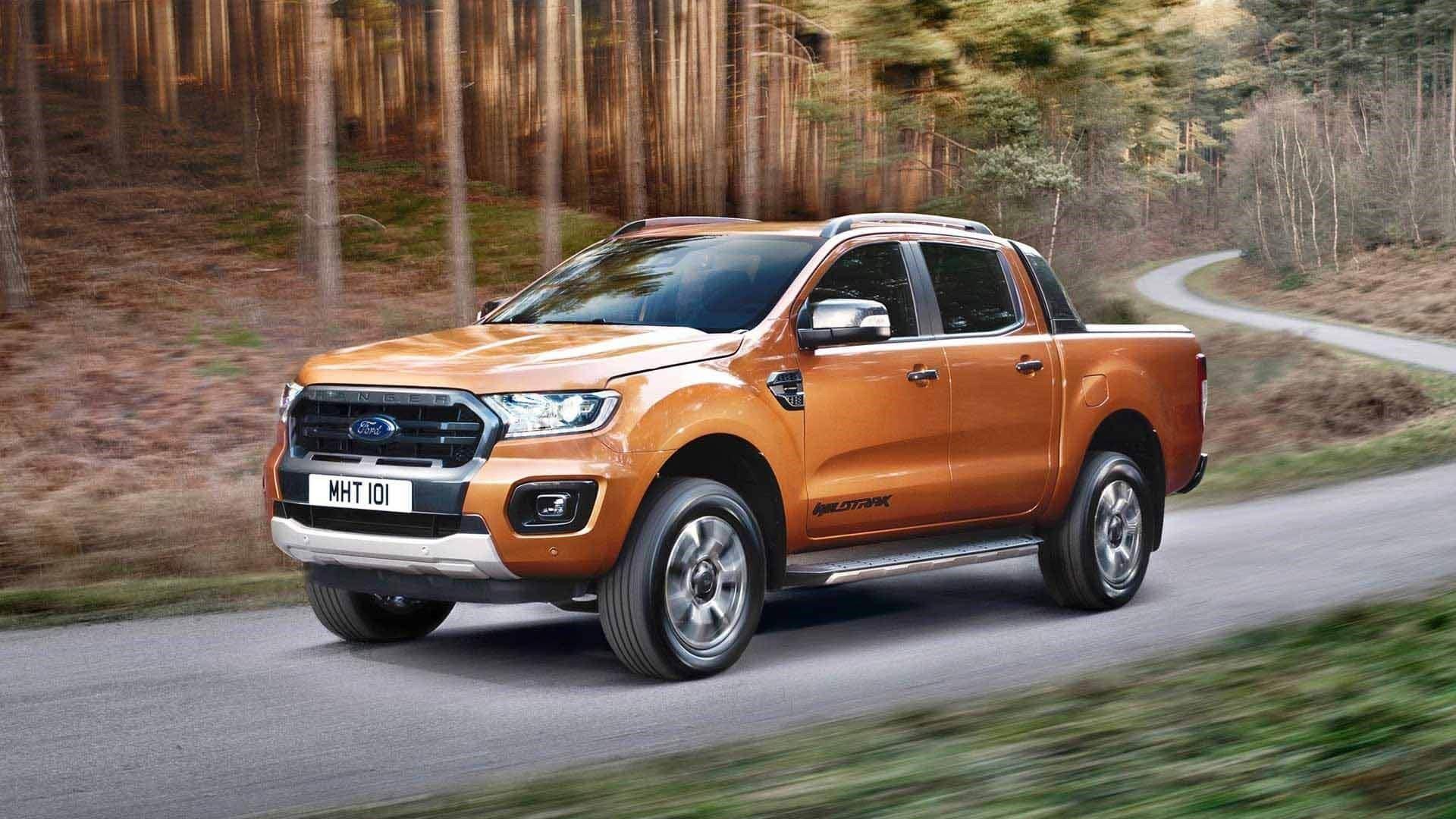 On the outside, the new Ranger has a unique body line with a recognizable front fascia. Unlike previous generations, it shares no design features and elements with bigger F-series trucks. By combining aggressive headlights with a sleek bumper and grille, designers achieved an eye-catching sporty look. Cabs come in two four-door variants, while the two-door option is not available at this time. Further design elements include contrasting fender flares and a tailgate spoiler for improved aerodynamics.

The situation under the hood is straightforward, with only one power-train combination being available. Although the engine is only a four-cylinder, it uses a twin-scroll turbocharger combined with direct fuel injection and multi-valve technology. Thanks to these innovative technical solutions, it develops 270 hp and 310 lb-ft, making it the most powerful Ranger ever. This engine comes with a 10-speed automatic transmission, which allows agile performance and improved fuel economy. As with previous trucks, there are rear-wheel or all-wheel drive variants.

We'll send you a quick email when a new Ford Ranger manual is added.

Yes! I'd love to be emailed when a new, high quality manual is available for my Ford Ranger. My email address is: