The Honda Civic first entered the US car market in 1972 as a 1973 model year. Since then, the Civic has built a name for itself for being reliable, affordable, and fuel-efficient. While it started as a subcompact, it has since grown to become a well-respected member of the compact segment. At the time of writing (September 2019), the Honda Civic stands as the #4 car sold in the US. With almost 35,000 units sold in August of this year alone.

Let’s now take a look at the Civics rise to fame - by reviewing the generational changes along the way. 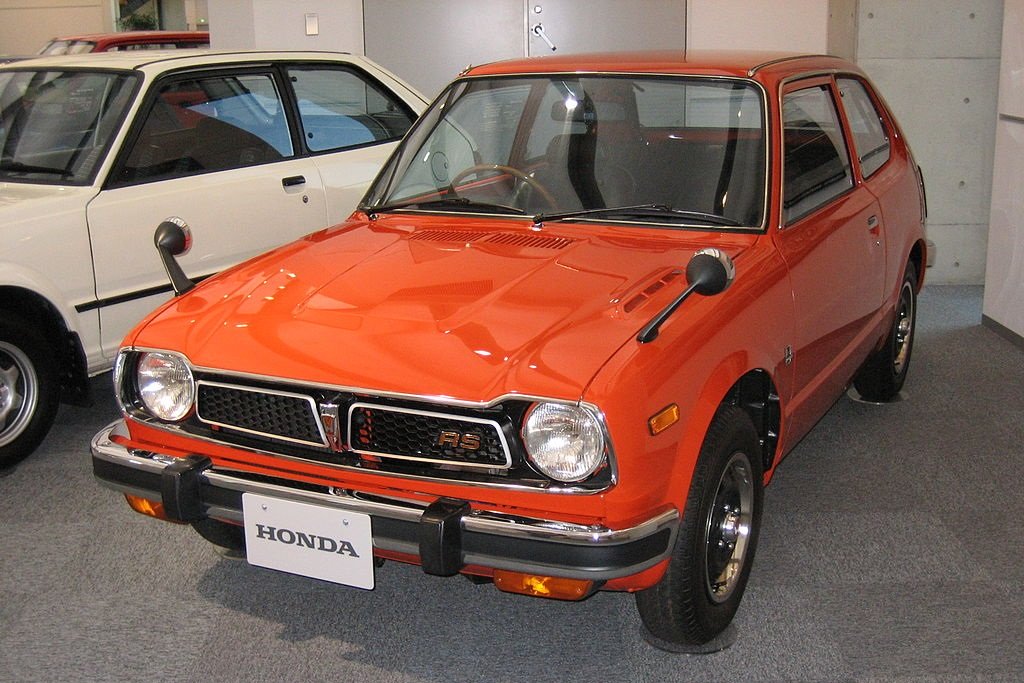 “It will get you where you’re going” - that was the original slogan given to the Civic. The first-gen Civic was available as either a 2-door coupe or a 3- or 5-door door hatchback. Under the hood was a 1,169cc, four-cylinder engine churning out an impressive 50-HP. Due to the 1973 oil crisis, buyers desperately needed a low-priced, fuel-efficient car that would last. For this and many other reasons, the Civic delivered notable sales figures in its first year (over 32,500 units sold).

In 1975, the Civic saw a mild performance upgrade with the addition of a 53-HP CVCC engine, and by the end of its first-generation, the Civic was up to 63-HP. Well on its way towards becoming one of the best-selling cars of all time. 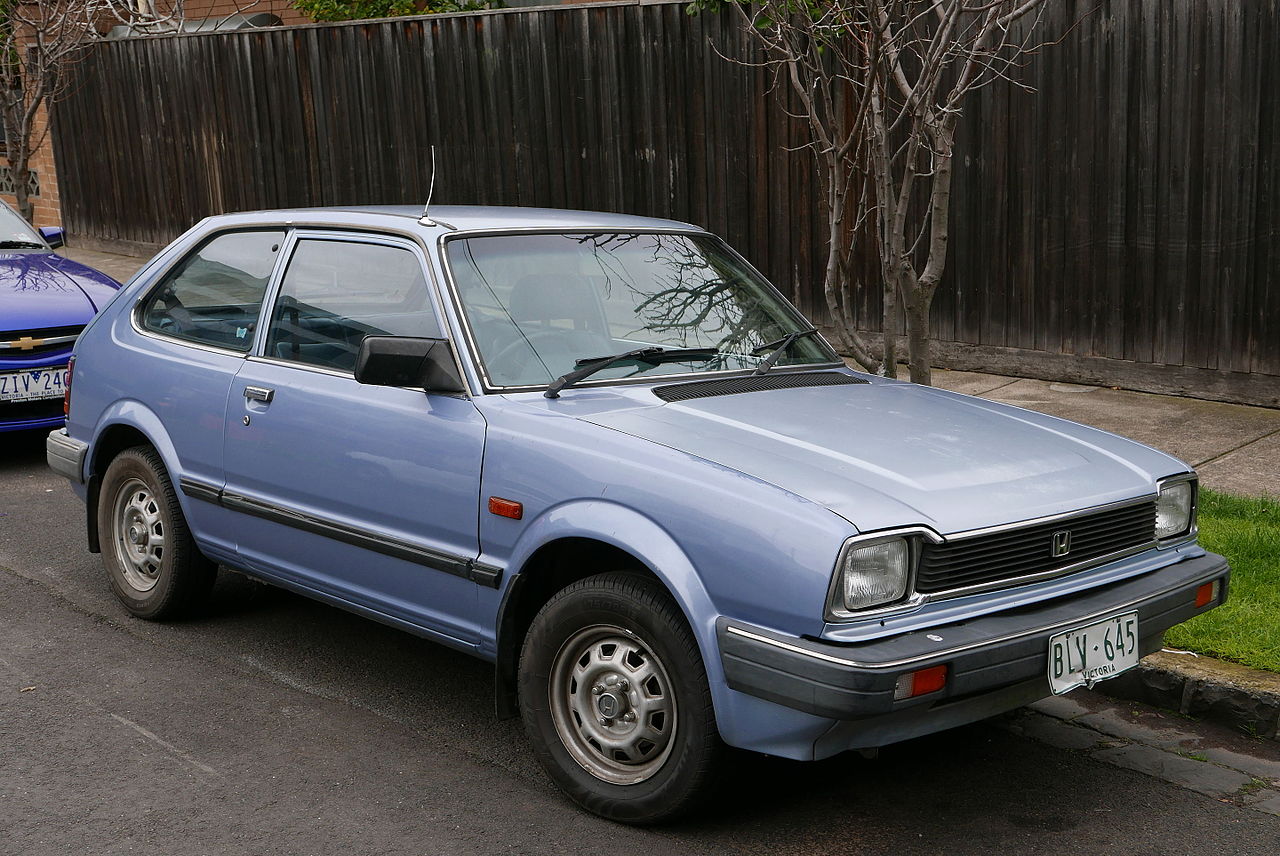 For its second-generation, the Civic enjoyed a complete overhaul. The body was more generous, the styling more angular, and the engines more powerful. By this time in 1980, Honda was only using CVCC engine designs because of how efficient they were. These included the base 1,335cc engine, capable of 55-HP, as well as an upgraded 1,488cc model pushing 67-HP.

The second-gen model also saw the introduction of an FE model (fuel efficiency). Allowing it to reach up to 41-MPG in the city, and as high as 55-MPG on the highway. Though the coupe was no more, the Civic did see the addition of a 5-door wagon model. 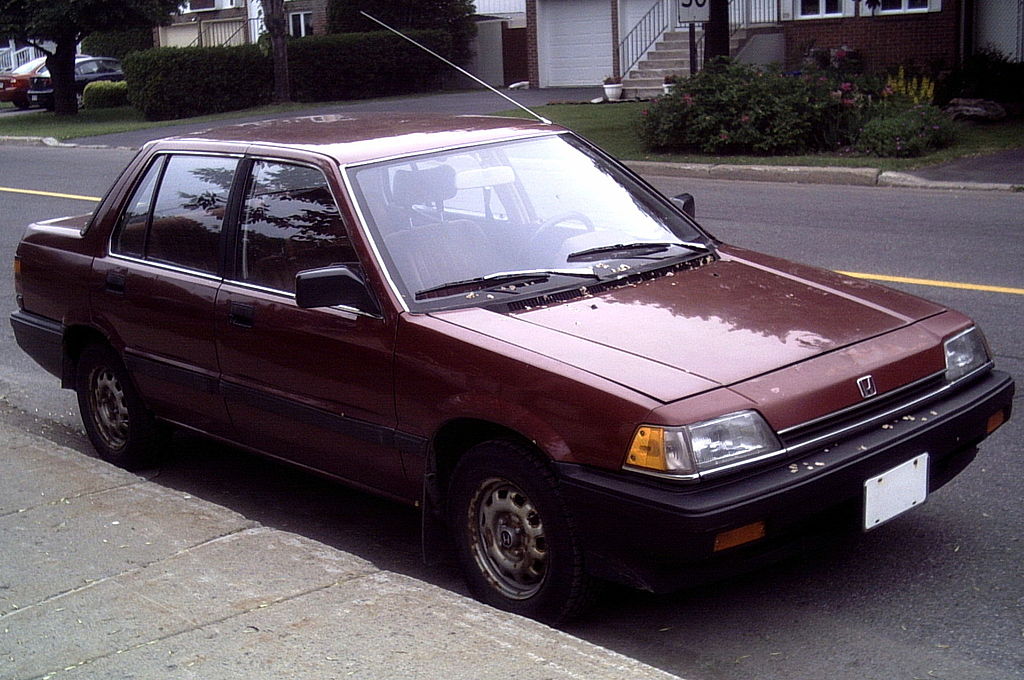 The third-gen Honda Civic saw the release of a radically-new exterior design that more closely resembled the Civic we know today. It was also in this generation that Honda decided to mix things up a bit. With the addition of a fastback coupe (labeled the CRX), as well as a larger 5-door shuttle-wagon.  This version of the Civic is also the first to feature Hondas popular D series engines, which first arrived in 1984. These were smaller and lighter, but still capable of producing a decent amount of power.

It was also during this time that Honda added a 4WD variant. Better known as Realtime 4WD, which (in some iteration) is still used to this day. 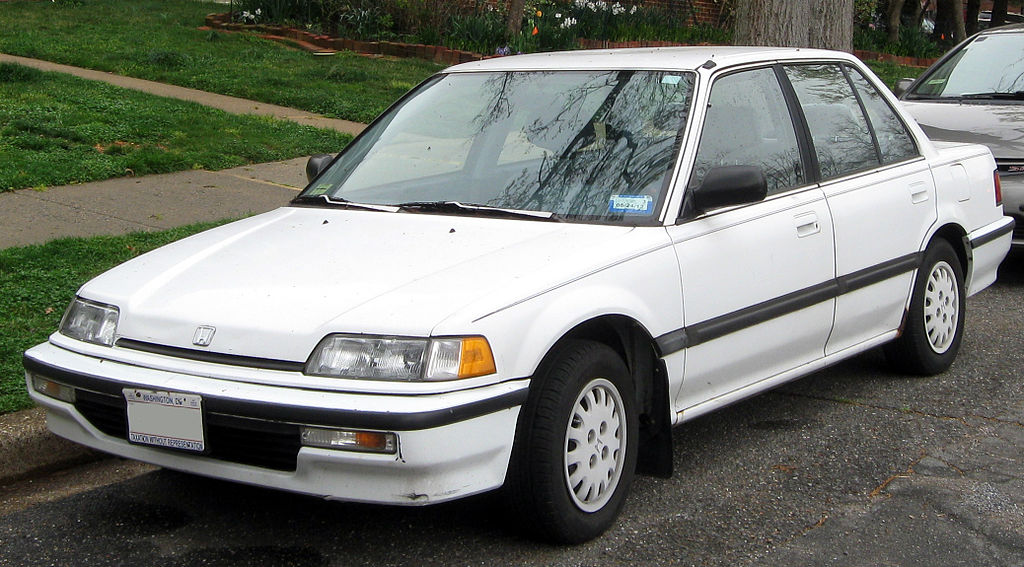 1988 saw the release of the fourth generation of the Civic. With it came new, more powerful engines, as well as a suite of new model packages.  Two of the most notable changes, though, were the addition of a double-wishbone suspension for the front and rear, and 4-wheel disc brakes. Because of these, handling improved dramatically, and so too did the Civics appeal.

By 1990, the Civic was available in three different model packages. First, was the DX, which featured a 1.5-liter, 70-HP engine. The upgraded LX came with a more powerful version of that same engine, producing 92-HP, as well as the option of power windows and locks.  At the top of the list was the EX, which came with the same features as the LX, but with larger 14" wheels and a more potent 1.6-liter engine. 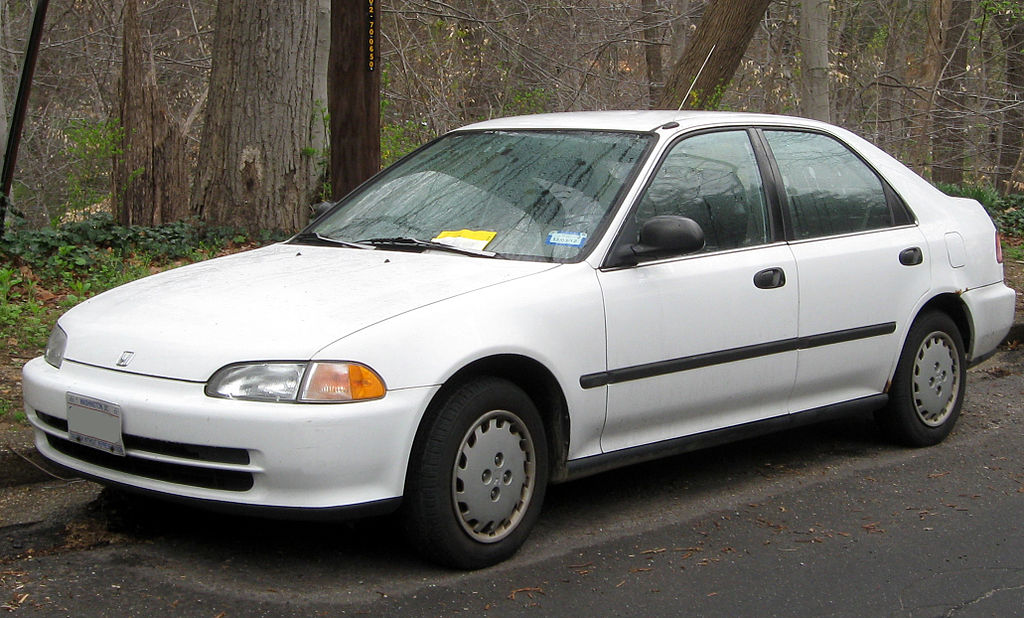 The fifth generation of the Civic marked another complete redesign. This time, with a focus on performance and safety. With its new aerodynamic styling and the addition of Hondas VTEC engines. The Civic was on its way towards mass-appeal. For the first time, features like standard side-airbags, and optional ABS brakes had arrived.

As a hatchback, the Civic came in either a CX, DX, VX, or Si trim.  For the sedan, DX, LX, as well as EX trim was available. The range-topping EX came with an impressive 1.6-liter VTEC, capable of 125-HP. Transmissions included a standard 5-speed manual, as well as a 4-speed automatic on the DX hatchback, and all sedan models. 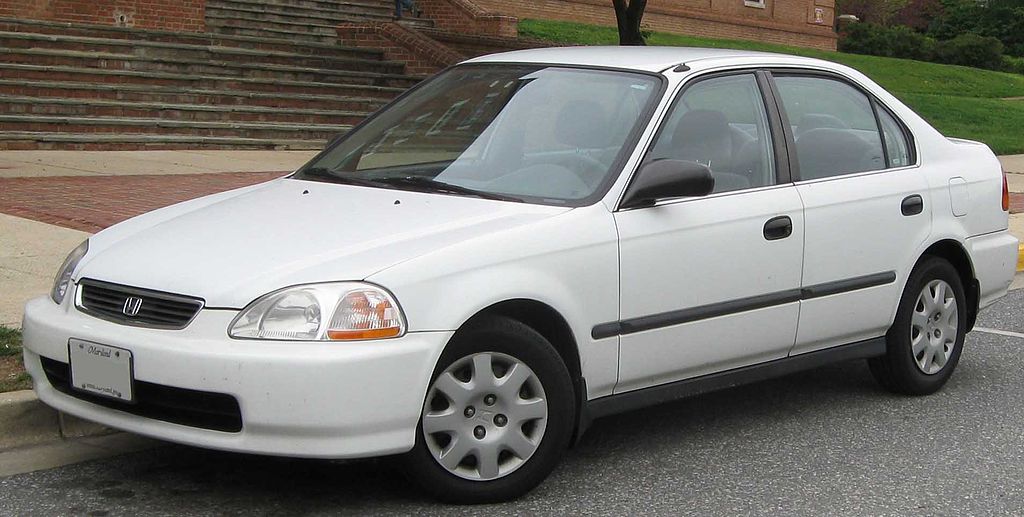 The sixth generation of the Civic was still a step forward, though, not as big a step compared to previous years. Sedans were still available in DX, LX, and EX trims, but Honda reduced the hatchback to only two, the CX and DX. New for this generation, though, was the 2-door coupe, the HX. Another first was the addition of a CVT, which promised to provide increased fuel economy while also upping performance.

Perhaps the most exciting news for this generation was the reintroduction of the Si, which was now available as a coupe. Under the hood was the most potent engine ever found in a Civic, a 160-HP, 1.6-liter VTEC.

As the Civic entered a new-millennia, so too did the options available to consumers. The front-end switched away from a double-wishbone suspension, in favor of McPherson struts.  This new design gave the Civic a stiffer, more capable handling ability. The interior also saw a notable increase in size, as the Civic emerged into the compact segment.

Another first, to stay competitive in the fast-growing market, was the addition of a Hybrid model. Capable of an astounding 46-MPG in the city, and 51-MPG on the highway.  A mid-cycle refresh occurred in 2004, adding new front and rear bumpers, upgraded headlights, and larger 15” wheels.

The public adored the Civics eighth generation, and it showed by the sheer number of awards it won. Not only was it the 2006 “North American Car of the Year,” but it was also the recipient of Motor Trends “Car of the Year” award.  The Civic was available in three variants, a 4-door compact sedan, a 5-door hatchback, and a 2-door coupe (sharing the same platform as the sedan). Under the hood was a SOHC 1.8-liter 4-cylinder featuring Honda’s I-VTEC technology. Compared to earlier models, the 140-HP it produced was impressive.

The latest rendition of the Hybrid model found itself paired to a CVT for the first time. This coupling allowed US consumers to enjoy a staggering 50-MPG in either the city or on the highway. 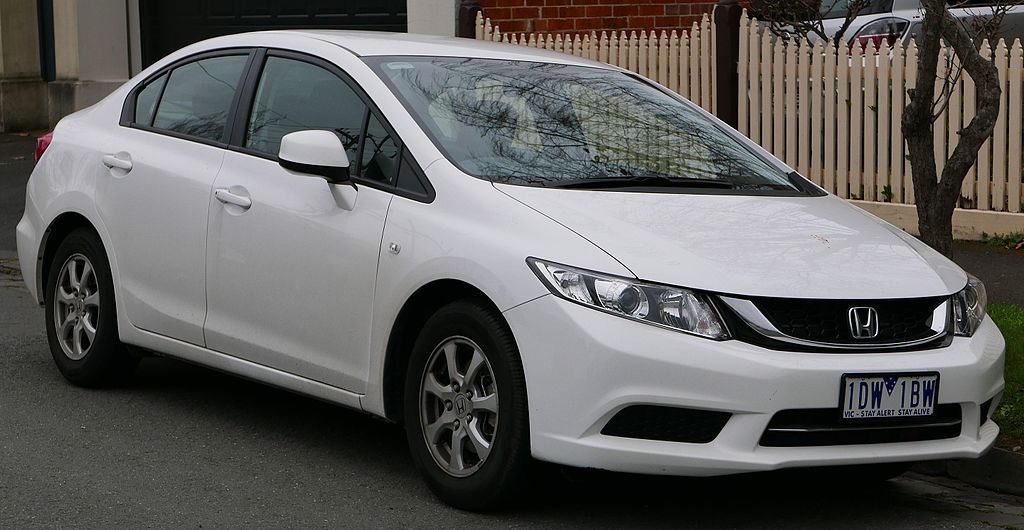 Due to the 2008 financial crisis, Honda aimed to make the Civic even more fuel-efficient, leading to the ninth-generation being smaller and lighter. New tech like "Eco Assist" helped to bolster mileage without lowering performance. By now, ABS brakes were standard on all models, including both coupe, and sedan. Extra features included VSA (Vehicle Stability Assistance) and EBD (Electronic Brake Distribution). As well as a new multilink rear suspension to improve ride quality.

These changes led to a Civic that was 8% more efficient than previous years. The latest version of the Si came with a brand-new 2.4-liter K-series engine, and by 2014, it was capable of 205-HP.

Fast forward to the modern Civic of today, and it is remarkable to see how far Honda's compact has come. Bold styling, innovative safety tech, and powerful engine options have led to one of the most advanced compact cars ever built. Model choices include the sedan, coupe, a 5-door hatchback, and Si. There's even a new Type-R model featuring over 300-HP thanks to its 2.0-liter turbocharged 4-cylinder, capable of reaching 0-60 in as little as 5.2 seconds.

As of August of 2019, over 233,000 Civics have sold this year alone. When you look back to where it all began, and the many changes along the way, it's not hard to see why the Civic has stayed popular in the market.

We'll send you a quick email when a new Honda Civic manual is added.

Yes! I'd love to be emailed when a new, high quality manual is available for my Honda Civic. My email address is: