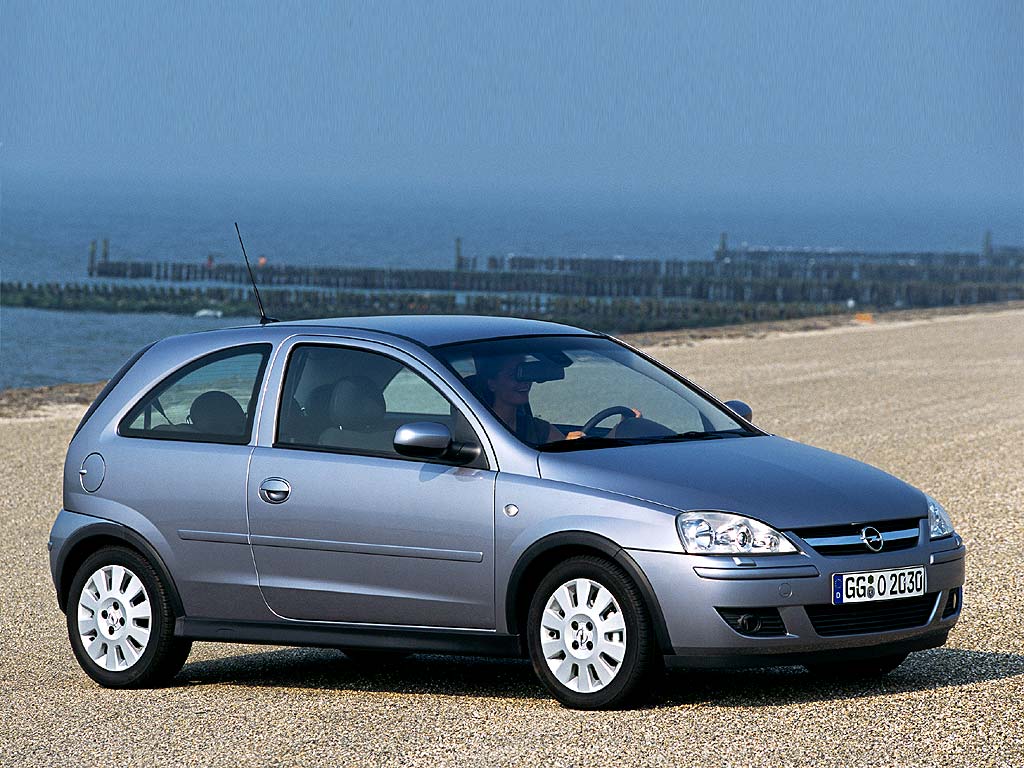 With a production run spanning over four decades and six generations, Opel Corsa is one of the longest living names in the industry. Being Opel’s representative in supermini class, it is a good example of the overall philosophy and virtues this European manufacturer appreciates. While some rival try to achieve a more upscale feel by offering innovative technology and design, Corsa aims at buyers who put function before form. With a simple and robust technology enveloped into a practical body shape, it has proven itself as a reliable and cost-efficient car for daily use. In all its generation, Corsa uses the same basic recipe. Engines and transmissions, although not being state-of-the-art, always offered a good balance between performance, fuel economy and running costs. While the most common body shapes in Europe were hatchbacks, other parts of the world got some additional variants. For instance, in Latin America and some parts of Asia, four-door saloon and estate versions were available. Depending on the trim level, there is a decent amount of equipment inside the car. But, from day one, the biggest advantage of this car was the roomy interior, with headroom, legroom and trunk space surpassing those in main competitors. Coupled with an affordable price, the Corsa was on a path for success. And with over 18 million cars sold worldwide, it showed that people at Opel knew what they were doing.

The first ever Corsa made its debut in 1982, at first targeting markets such as Italy or France, where small cars had a significant market share. Although designed and engineered in Germany, Opel only manufactured this car in their factory in Spain. The boxy outer design, typical for that time, combined with a high roof line ensured there is more-than-average room inside the car. The interior design followed the same theme, with straight dashboard shapes and simple but comfortable seats. By the end of the 1990, Corsa received a facelift in the form of new headlights, grille and bumper. 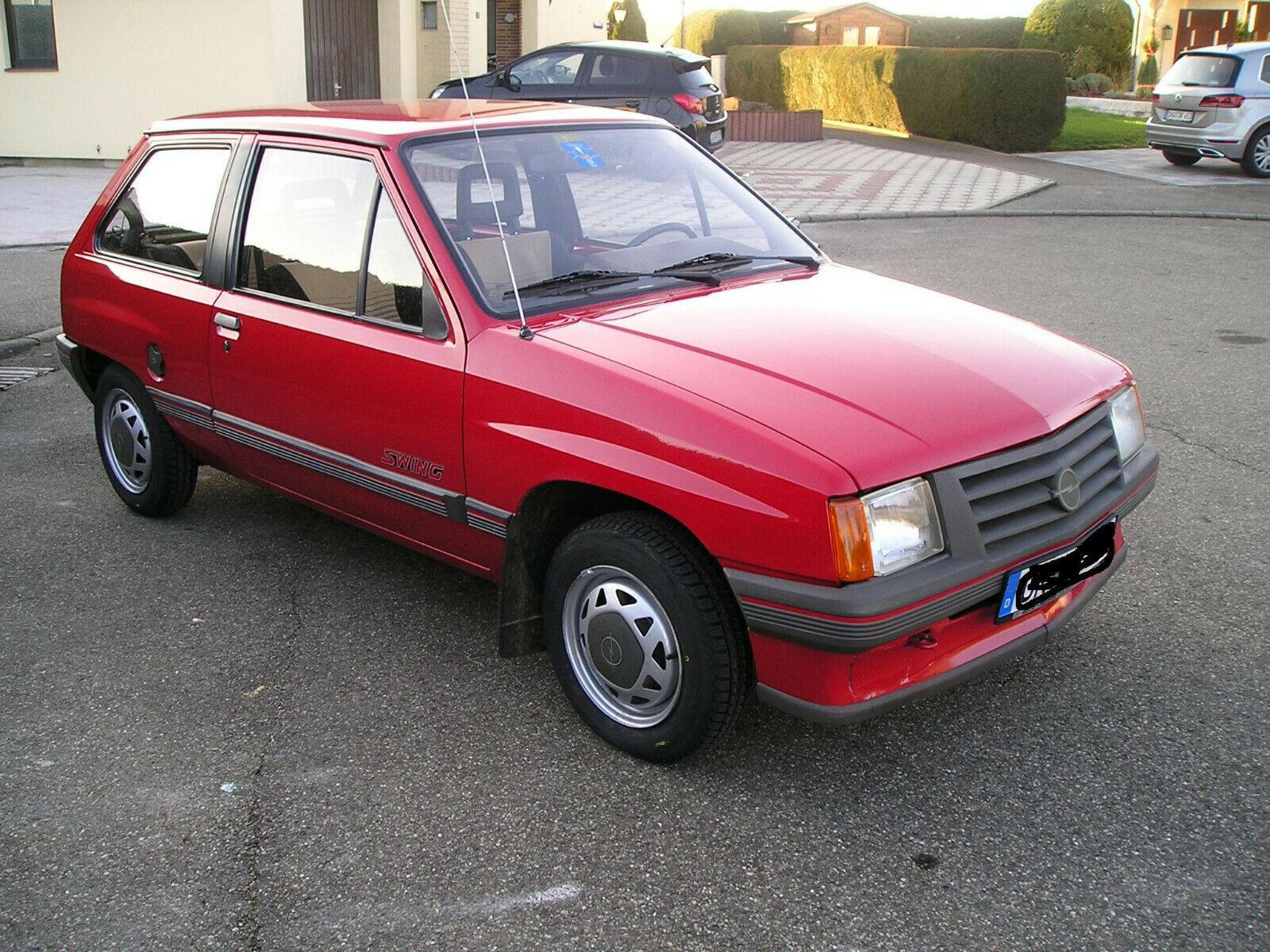 Under the hood, there was a wide range of four cylinder gasoline engines, first as carburetted units with fuel-injected versions coming later during the production run. There was also an Isuzu based diesel engine, with or without a turbocharger. Smaller engines came with a 4-speed manual and bigger ones had a 5-speed manual transmission as an option. Top of the range model, badged as GSI, had a performance orientated engine with multi-point fuel injection mapped by a tuning specialist Irmscher.

Unlike its predecessor, which looked as a man who had only a ruler designed it, the new Corsa featured a more rounded and bubble-like design. The overall reception of the new look was more than satisfying. Both automotive journalists and buyers found it to be modern, likeable, and well-shaped. This car has a certain timeless appeal that makes it look fresh even by today standards. Interior also saw major improvements, with upgraded functionality, better materials and added safety features. 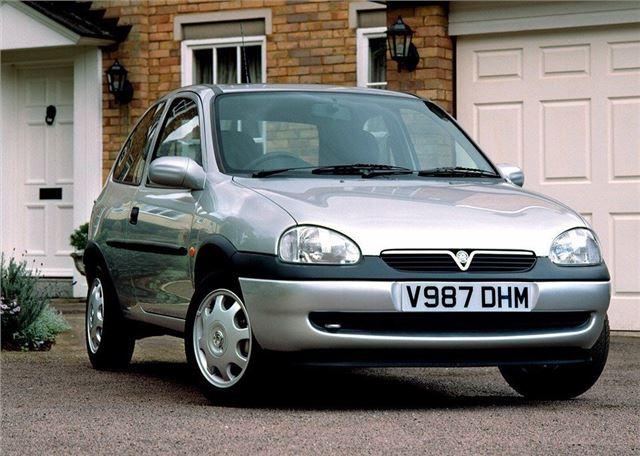 With the old car being so reliable and well received for its mechanics, there were no revolutionary changes under the hood. Instead, Opel had made a practical and purposeful evolution. The engine range started with several reliable four-cylinder gasoline units that found its way from the previous generation, as so did the Isuzu-sourced diesels. There were also several new EcoTec engines in three or four-cylinder variants. These freshly developed units featured multi-valve heads, fuel-efficient tune, and many emission control devices. This enabled improved performance, better fuel economy and lower emissions. Besides the standard five-speed manual, buyers could now choose an optional four-speed automatic transmission.

Following the success of the previous generation, Corsa in its third iteration used a design that was similar but also noticeably updated and modernized in many ways. While the general shape was much alike, flat surfaces and sharp edges made it look more aggressive and appealing to younger buyers. Just like on the outside, the interior featured a similar overall design as an old car, with cosmetic modifications that made it look more up-to-date with then current trends. However, many believed colors and materials on the inside to be too cheap and dull, although this improved over the years. 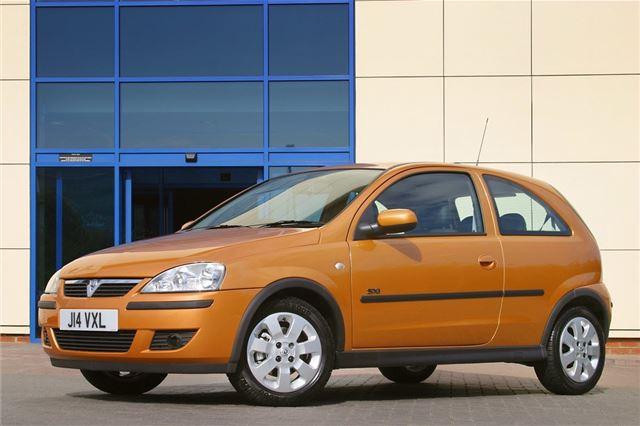 More important improvements were hiding under the skin, with all engines having multi-valve cylinder heads and upgraded fuel injection. This generation of Corsa was first to get new diesel engines with common rail injection and variable turbocharger geometry. Marked with CDTI badge, these small hatches would provide great accelerations and overall road performance, while achieving superb fuel economy. For transmission choices, besides the standard five-speed manual and four-speed automatic, there was also an innovative semi-automatic option. This was a modified, robotized version of a standard manual transmission, where a series of servos and solenoids would perform gearchanges instead of the driver.

As the outgoing model achieved mixed results over the years, most due to the lack of a real appeal, the new Corsa needed a fresh approach. For a start, it adopted a very different look, both inside and out. The overall shape and design elements of the new car had little to share with its predecessor. It also grew in size, just like most of the competitors of that time. Still, thanks to wise design tricks, it kept a well-proportioned appearance. Unlike previous generations, which offered sedan or estate versions on certain markets, new Corsa was available only as a hatchback with three or five doors. Interior received a major upgrade, with better dashboard design and vivid materials. This made it look more stylish and improved general appeal. 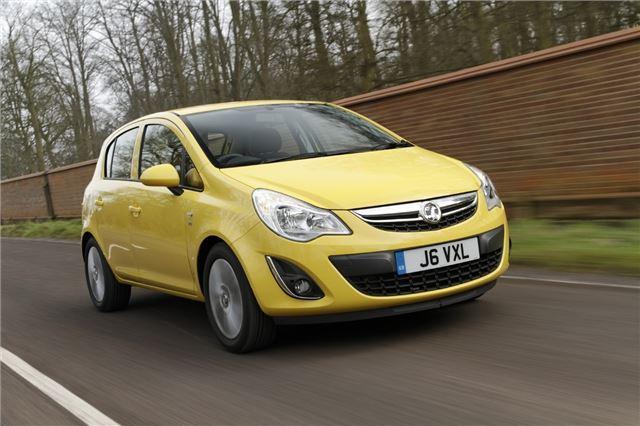 During the first few years of production, new Corsa had engines carried over from the previous generation. However, these were gradually replaced with new units that complied with strict Euro5 emission standards. There was a three-cylinder engine, several four-cylinder units with variable valve timing and a pair of diesels. To round up the package, there was a powerful turbocharged version, called OPC. This stands for Opel Performance Center, and it developed up to 210 HP, depending on the trim level. Transmission choices ranged from five or six-speed manuals, four-speed automatic or semi-automatic with six speeds. The ride quality was another improvement, as this generation used a new platform that it shared with Fiat Punto.

Revealed at the 2014 Paris Motor Show, the new Corsa appeared as a car redesigned from the ground up. Besides reworked front and rear fascia, it featured fresh body lines and updated design elements, such as headlights with a prominent undercut. However, a closer look would reveal that the overall body structure, roof and glasses are identical to the old Corsa. Although being a well executed facelift, rather than a whole new car, the market perception was very good. On the inside, there was a redesigned dashboard with updated instrument cluster, controls and an optional infotainment touchscreen. Soft materials and colored trim elements only added to the upscale appearance. 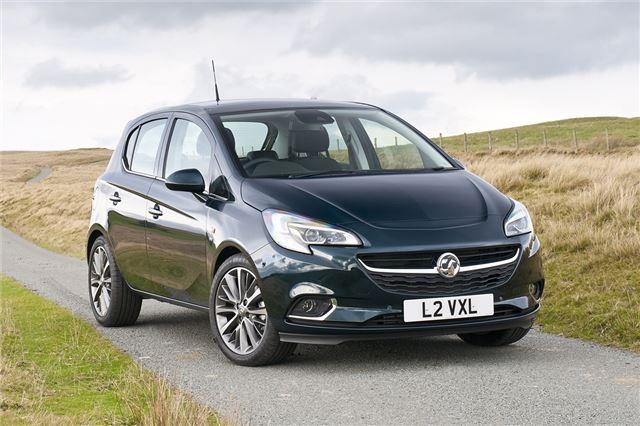 As this car shared the chassis and body structure with its predecessor, it is no surprise to find similar engines under the hood. The biggest change was a new, three-cylinder turbocharged engine. With it, even base models became more agile and gained better performance with no impact on the fuel economy. On the other side of the range, top of the range OPC variant offered more powerful engine combined with adaptive suspension, improved steering and bigger brakes. Track orientated drivers could even choose an optional limited slip differential, which improved cornering characteristics.

Except for thunder-inspired badge and the name itself, current Corsa has little to share with the car it is replacing. With Opel now being a part of the French PSA Group, Corsa no longer uses a GM platform. Instead, it has the same structure and underpinnings as Peugeot and Citroen representatives in this vehicle segment. While the length remains unchanged, the new car is lower and narrower. This allowed for better proportions and visual appearance focused on elegance and refinement. Many design cues it shares with bigger models will tell it is an Opel, like wing-shaped headlights or a prominent crest on the hood. A big central infotainment display and a digital instrument cluster dominate the interior. There is still plenty of room inside, despite the lower roof line and sloping windshield. 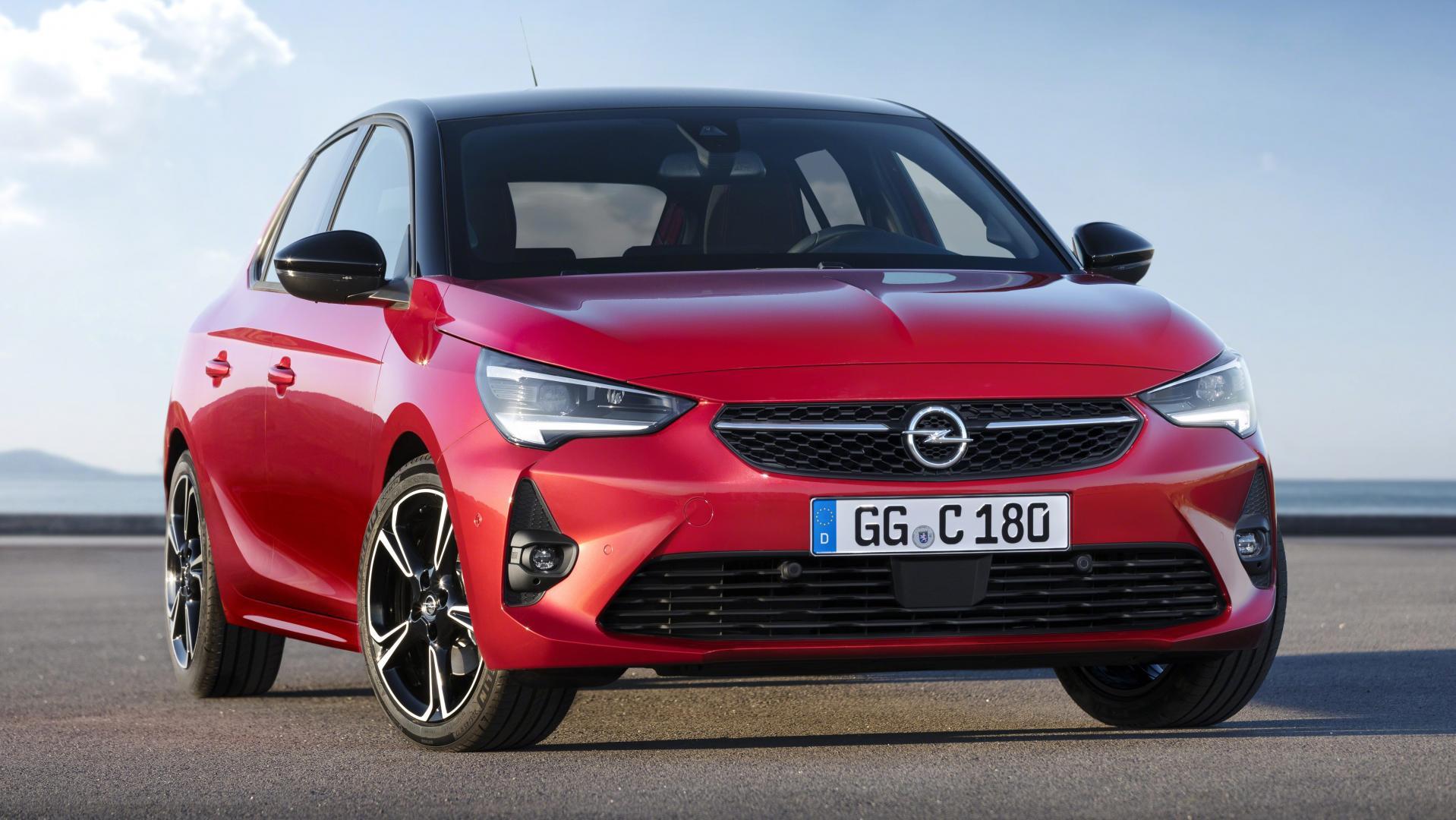 Just like on the outside, there are major changes under the skin, with significant weight savings being one of them. There is only one gasoline engine, a three-cylinder unit that comes with or without the turbocharger and in three different power outputs. This is a PSA-sourced engine, just like the one diesel that it is available. Still, the most important news is the arrival of an all-electric version, called Corsa-e. With 136 HP electric motor and a range of up to 200 miles, it takes on rivals such as Nissan Leaf or Renault Zoe.

We'll send you a quick email when a new Opel Corsa manual is added.

Yes! I'd love to be emailed when a new, high quality manual is available for my Opel Corsa. My email address is: